Influences on ME - Guidelines by Stealth 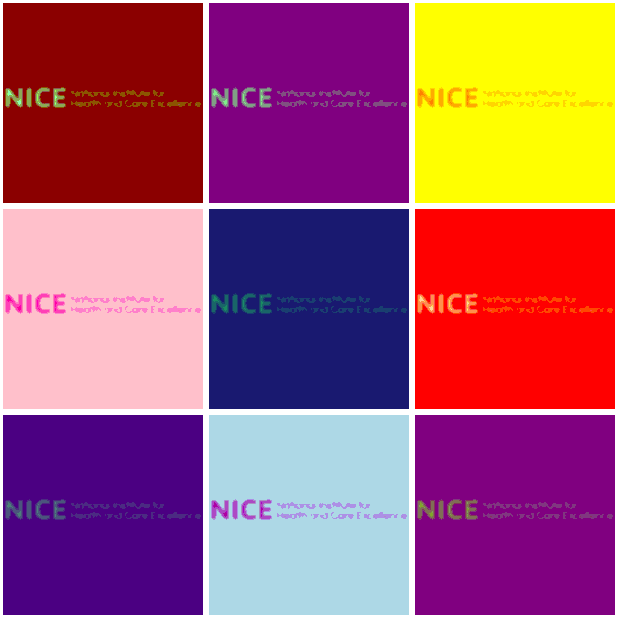 Still no replies or response to the questions that Invest in ME Research posed to NICE following the abrupt and unprincipled pausing of the final guidelines just hours before the due date for publication.
This demonstrates the continuing disregard from NICE for instituting any semblance of excellence for patients' health or care. [1].

Instead, they pander to establishment forces that are unhappy with any attempt at removal or downplaying of the biopsychosocial gravy train of "treatments" that were forced onto patients by the 2007 CG53 guidelines..

Careers and egos and influence are the order of the day - patients can take a back seat!

Following the disingenuous pause in the planned publication of the final guidelines documents NICE has organised a roundtable for their chosen, favoured interested parties - those who want to force their demands on the final outcome and those who are invited because they will readily comply and wish to be viewed as the sole representatives of NICE's' perception of the patient community.

Meanwhile, with the date for this secret roundtable being changed again in order to draw out the proceedings even further, most registered guidelines stakeholders remain oblivious to what is going on and patients become concerned and weary due to anxiety of these manipulations.

But no matter.
After all, the only thing that the establishment wants is compliance with their demands, after "reasonable discussion", of course!!

There are, of course, always those who are only too happy to attain or retain their actual or perceived status as "representatives" and who willingly sign gagging orders to prevent any information leaking out.

By integrating interested parties as "representatives" from the patient community into their workings for this stratagem then all discussions are closed down and a veil of patient acceptance is pulled over any serious attempt for explanation.

No debates are possible, no information is given.
NICE can bide its time with piecemeal tidbits of information delivered via its new network of compliance.

No need for registered stakeholders to learn of what is happening, let alone patients being informed.
An insidious de facto process takes its course. 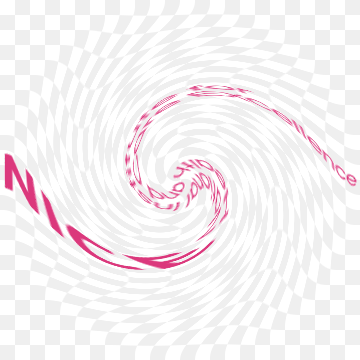 Yet why is this needed - or accepted?

There is no reason to provide NICE with any legitimacy for this fabricated roundtable meeting by going along with it and giving it support by default.

Patients do not have to support this forced imposition of compliance.

The final guidelines would show the lack of any policy to deal with ME over the last fourteen years [3] since the 2007 CG53 guidelines were published.

Yet even this summary of the guidelines from December 2020 risks being watered down even further by an illicit roundtable convened for just the chosen few without any real justification.

The guidelines process was performed, an attempt to create an evidence base was made, comments on a draft guidelines document were made and processed and the final guidelines were given a date for publication.

Due process was followed according to NICE's own regulations and whichever side of the NICE "balance" is satisfied or dissatisfied is something that would need to be dealt with after publication.

If NICE were truly standing up for patients then all they would need to have done is publish the guidelines on the date chosen.

No need for delay, no need for secret roundtables to discuss with those who will not change despite the human wreckage their ideologies and vested interests leave behind.

But no - instead we have guidelines by stealth.

Nobody should legitimise further manipulation, fudging and double-dealing involving "interested parties" seemingly only representing themselves.

Patients might be well advised not to give their blind trust to any group involved in secret meetings with no transparency of what is really happening.


Meanwhile,
the promise from the NICE CEO that she would reply fully to our emails is abrogated,
our questions to NICE remain unanswered [https://www.investinme.org/Letter-to-NICE-Sep2021.shtml#q],
the existing guidelines with flawed recommendations remain in place without any warnings as IiMER requested,
and patients are ignored and allowed to experience more uncertainty, dismay and even anxiety. 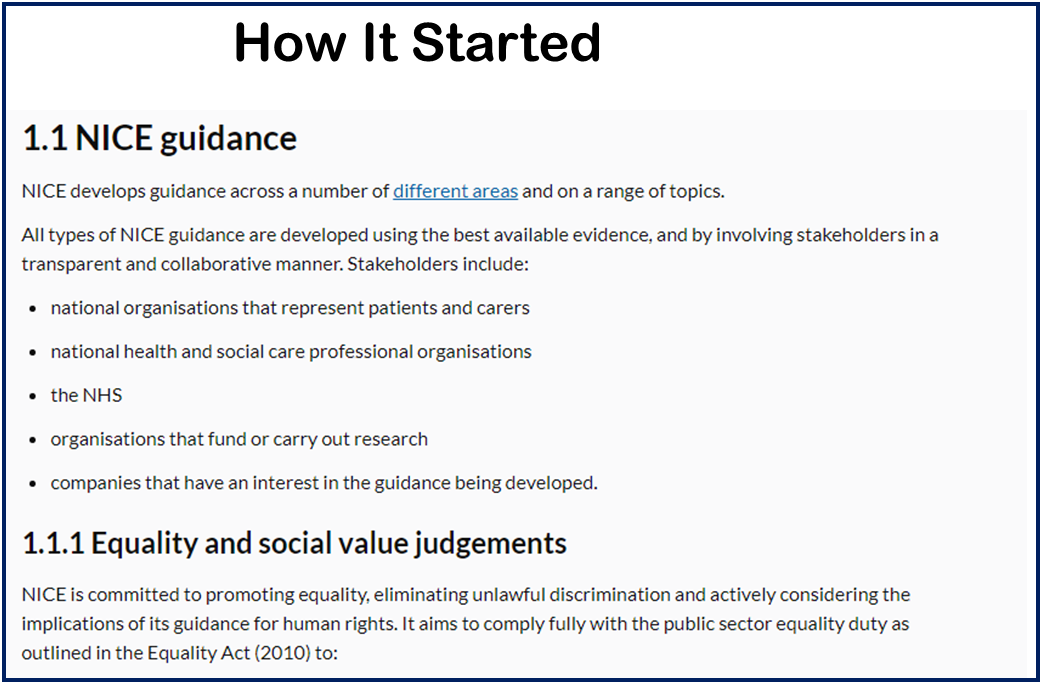 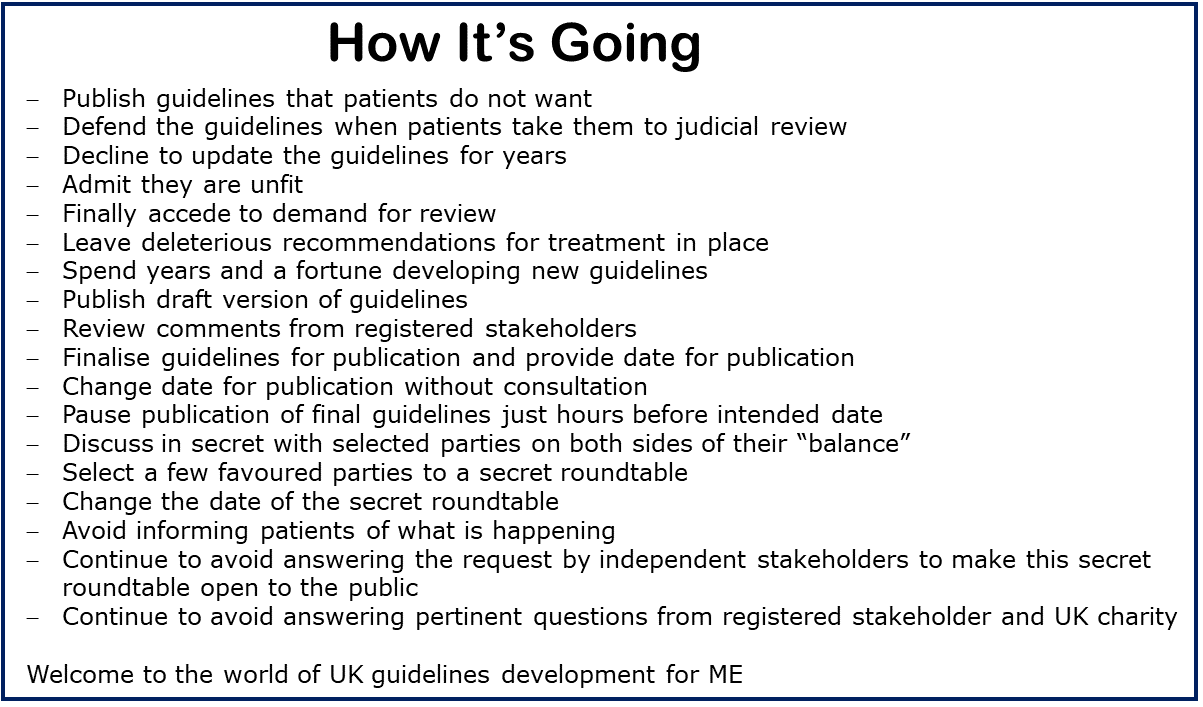 On 21 September NICE issued this statement -

The roundtable will be an opportunity for all parties to discuss key issues raised prior to publication. The decision on next steps will be made by NICE, taking into account comments made at the roundtable. NICE will release the agenda ahead of the meeting and minutes will be published afterwards.

NICE has invited relevant professional organisations to attend the meeting, plus representatives from interested patient groups. Unfortunately there are too many patient groups to invite everyone, but we have aimed to ensure a full range of perspectives.

Professor Dame Carole Black has kindly agreed to act as an independent chair of the roundtable discussion. Dame Carole is an experienced chair who is independent of NICE and of the development of the ME/CFS guideline. She will facilitate the discussion and will not take part in NICE decisions.

Dr Paul Chrisp, director of the Centre for Guidelines at NICE, said: “We acknowledge that patients will be concerned about these further developments in what has been a long and difficult guideline process. We hope that by holding a roundtable discussion we can understand the issues raised by the professional bodies to inform NICE’s thinking on the next steps for publication of the guideline.”

The roundtable is now an obvious irrelevance.

NICE is not providing "an opportunity for all parties to discuss key issues raised prior to publication".
NICE is instead shielding discussions from patients and stakeholders - other than those chosen, favoured "interested parties" who have willingly signed a gagging order that has the sole objective of closing down all open discussion of this decision by NICE.

The NICE statement masks the background influences that have been brought to bear on this particular disease.
It deflects attention from all of the secret and hidden discussions that have gone on between favoured "interested parties" since 17 August 2021 - away from the view of the patient community.

NICE has acceded to IiMER's request to make an agenda available and for minutes to be released after the event.
Yet the comment that -
"The decision on next steps will be made by NICE, taking into account comments made at the roundtable"
illustrates that anything is up for grabs and is another ominous note that will continue to add anxiety for all patients who still have any belief in this now discredited process.

After a multi-year review of the guidelines for ME a set of draft guidelines had been distributed to all stakeholders and ample "opportunity for all parties to discuss key issues raised" had been provided during the phase before the final guidelines were to be published.

There is no requirement to discuss more.

Why should NICE take "into account comments made at the roundtable" when all stakeholders have had an opportunity to comment on draft guidelines via due process that was set up by NICE?

Why would this "opportunity for all parties to discuss key issues raised prior to publication" not be made available to all stakeholders?

As we wrote to NICE CEO Professor Gillian Leng -
"Why can this hastily arranged and irregular roundtable not be performed after the final guidelines are published? We should remind NICE that no such opportunity was given to patients following the final review of the CG53 guidelines prior to their publication in 2007. Instead, patients were forced to find the resources in order to take NICE to a judicial review to remove the harmful recommendations."

We received no reply.

NICE state that it has "...invited relevant professional organisations to attend the meeting, plus representatives from interested patient groups."

This is disingenuous and false.
In reality NICE has chosen to invite those groups who have made demands and those groups who will remain compliant and will readily sign the gagging order to prevent discussion in the open whilst claiming to represent patients.

NICE also state "Unfortunately there are too many patient groups to invite everyone, but we have aimed to ensure a full range of perspectives."

That is false.
NICE managed to accommodate anyone who wished to listen in to one of their recent meetings.
Then there were not "too many" patient groups who could listen.
The decision by NICE that their Public Board meeting of 15th September was to be streamed online to the public, with the agenda already visible beforehand [click here] demonstrated that there need be no restriction on viewers and no problem for them to arrange.

NICE has chosen to exclude patients from viewing the proceedings of this secret meeting - instead they must rely on their chosen "interested parties" and whatever minutes from the meeting that are allowed to be recorded.


Those who willingly sign up to gagging orders to assist in the avoidance of open discussion should be afforded no legitimacy or support.

The final comment by NICE guidelines director Dr Paul Chrisp -
"We hope that by holding a roundtable discussion we can understand the issues raised by the professional bodies to inform NICE’s thinking on the next steps for publication of the guideline."
lays bare the falsehood of this NICE press release.

The guidelines development took several years and an enormous amount of money (a sum of public funding that is routinely denied to biomedical research into ME). A draft document was produced according to NICE's own guidelines development protocols and comments were invited from stakeholders, and then answered.
The final guidelines were given a publication date.

There is no reason to prolong this with further discussion. That can take place after publication.

Our view is that this disingenuous statement by NICE should be viewed by all patients as lacking credibility and a further attempt to avoid real scrutiny.

It does nothing more than obfuscate the irrelevance of this secret meeting where only NICE's favoured "interested parties" are involved.

As we said here [5]- open this meeting to all or all should refuse to attend.