A Simple Question to CMOs of UK

Replies - or not - from a Question to the Chief Medical Officers

Invest in ME Research has frequently contacted the Chief Medical Officer of England over the years that the charity has been in existence.

Often these have been associated with requests to attend our international conferences – conveniently located just a couple of hundred meters from the CMO’s office.

Last year we arranged for a meeting with all CMOs of the UK in London. All agreed – and in the end we met with the Deputy CMO of England who was apparently covering all UK bases.

A list of points was arranged to be discussed [1].

In our Christmas / New Year Fund Appeal Advent Calendar we looked at the function of the UK Chief Medical Officers.

However, rather than send in another request, another list of points, we decided instead to do things differently.

In this United Kingdom (which appears less and less united as the years go by) we put one simple question to the CMOs of the UK – something which they could easily answer.

We allowed them to address, via Invest in ME Research, the ME community – the patients, the families, the carers, the friends, as well as the wider public.

One Simple Question to the UK CMOs

Replies from CMOs of UK

Reply from the CMO of Northern Ireland 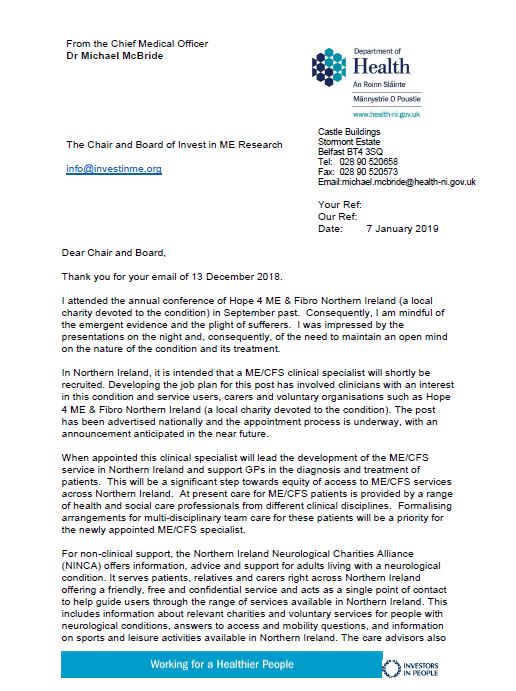 Our response to CMO Northern Ireland 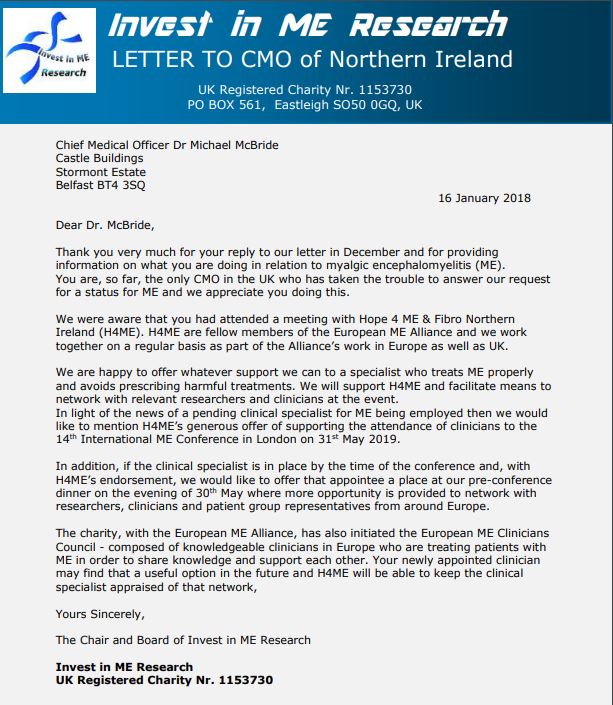 Reply from the CMO of Scotland 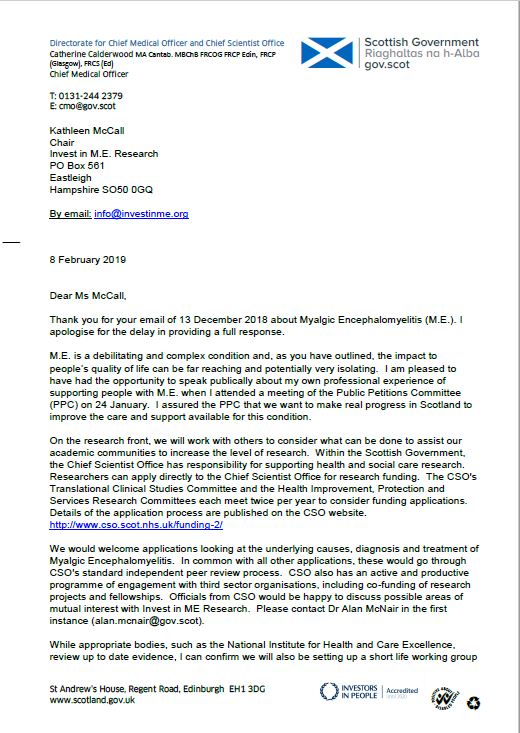 Reply from the CMO of Wales 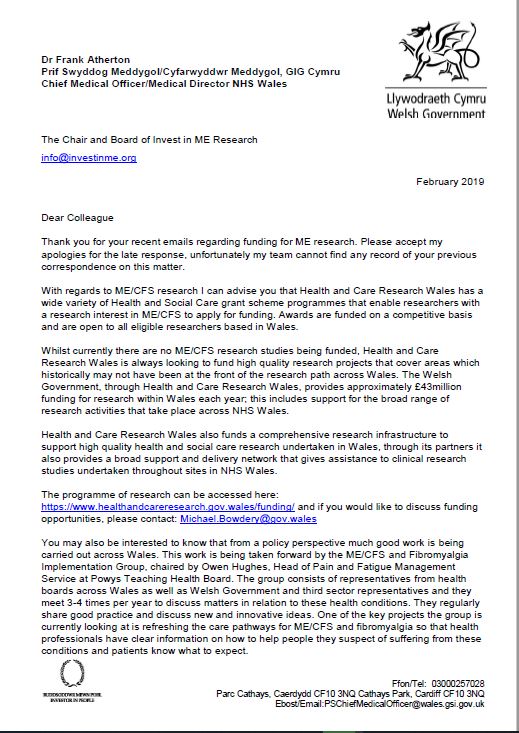 Reply from the CMO of England

No reply or acknowledgement 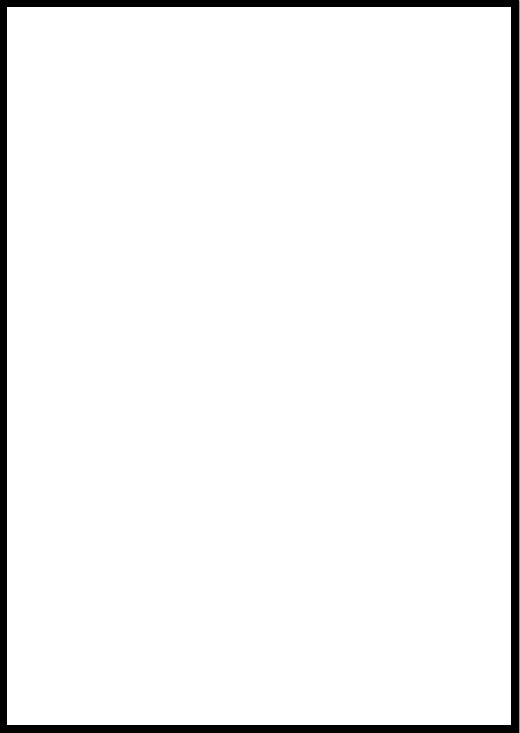 It is all too easy, yet unacceptable, for establishment entities who are responsible to the public to abrogate their responsibilities.

Only the Chief Medical Officer of England - Dame Sally Davis - has avoided any acknowledgement of our letter and has provided no answer.

We wrote to Dame Sally Davis three times - no acknowledgement, no reply, no interest!

This is, sadly, typical of Dame Sally Davis' attention to ME during her tenure as Chief Medical Officer of England.

Her office, in our opinion, has been completely negligent in making any progress in the perception, treatment or research into  ME.

She will vacate that office this year after 8 years in that role - though it is unlikely any ME patient or their family will notice her departure.

Whilst the usual sycophantic establishment applause for her tenure comes forth people with ME can instead look at eight years of apathy regardng ME from the CMO of England.

Dame Sally now leaves for a new job.
But let us revisit the press release when she was appointed.

Professor Dame Sally Davies was today named as the Chief Medical Officer (CMO) for England, the first woman to hold the post.

The CMO is the Government’s most senior medical advisor, responsible for providing expert advice on a wide range of issues relating to the health of the nation, including the handling of health related emergencies.

Dame Sally, who has been interim CMO since May, will take up the post with immediate effect. She currently holds the post of Director-General for Research and Development and Chief Scientific Adviser at the Department of Health.

Key responsibilities for the role will include:

"I am delighted to be asked to become the Chief Medical Officer for England and take this opportunity as the professional lead to strengthen public health in this country. I am honoured to be the 16th person and first woman to join the prestigious ranks of Chief Medical Officer and I look forward to working with everyone to improve the health of the nation."

"I am delighted that Sally has been appointed Chief Medical Officer. In her time at the Department, and in particular over the last nine months as interim CMO, she has demonstrated her expert knowledge of her field and provided invaluable advice to Ministers on a broad range of issues from flu to nutrition to health protection. She will play a key role in developing the new public health service, shaping the way the Department improves and protects the public’s health. I look forward to working closely with her."


It is quite easy to examine her record on these objectives, when assessing ME.


We saw no clear, independent and evidence based advice to the Secretary of State for Health and the Government on anything related to ME


We saw no efforts made to bring together key partners to improve and protect the health of people with ME within and beyond government,


We saw no building of collaborative relationships with colleagues in the devolved administrations regarding ME, and no efforts


From our viewpoint we see that Sally Davis achieved nothing for ME.

As far as ME is concerned her term in office marks a period of abject failure - with hundreds of thousands of citizens - children, parents, carers - left with no real change in status since the 2002 CMO report made by her predecessor.

Another ineffective establishment hindrance to progress.

As with the establishment in UK [3] failure is always an option.

Invest in ME Research had requested a meeting with all four CMOs (England, Wales, Scotland and Northern Ireland) and on Wednesday 11 January 2017 a meeting took place with the Deputy CMO of England Dr Gina Radford at Whitehall Court, London.

Interactions with the Chief Medical Officer of England.

Failings of the Establishment Organisations Toward People with ME

The failings of establishment organisations when dealing with ME